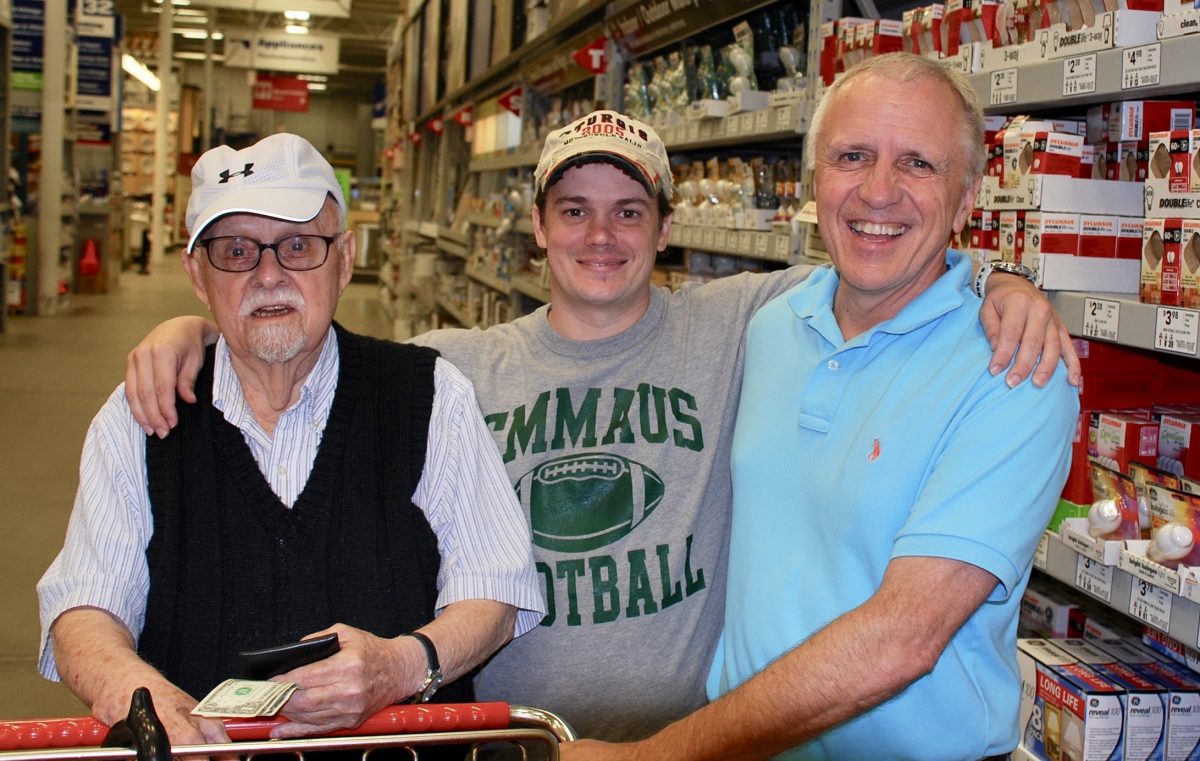 One of my favorite photos is my dad, my son and me out and about together. All three of us enjoying a bond with one another like no other.

My dad lived just beyond age 101. I spent almost every day with him his final 10 years. We were not just father and son – we became best friends.

What I miss most is his positive presence and natural curiosity. During our last conversation, he seemed to be reaching for something I could not see. I asked him, “What are you looking for, dad?” He replied with no hesitation  “Whatever there is to find.”

I admired his career as a college professor, genetics researcher and textbook author.  While I never quite got the bug for being a scientist, I did pick up his inquisitive mind and love of the photographic arts.

While I took my own path away from my father, what helped me most with our later relationship was the fifth of God’s 10 commandments – and the first commandment with a promise…

“Honor your father and your mother, that your days may be prolonged in the land which the Lord your God gives you.” Exodus 20:12

My friends have had a variety of dad experiences. Some followed their father’s footsteps. Some ran away. Some have no idea who their father is. Others wish they never knew their dad. Others have step dads or adopting fathers.

My observation is that love, honor and respect for our dads is a combination of circumstances and decisions. Having done a little homework for this article, I am particularly appreciative of Father’s Day.

Father’s Day in America began in 1910 as a celebration to honor fathers at a YMCA in Spokane, Washington.  Father’s Day is now designated by federal law as a permanent national holiday every third Sunday of June for which the President is to issue a proclamation—

Regardless of your circumstances, whether your dad is alive or not, good or not so much, make a decision to honor him. Consider a phone call, email, or gift? Maybe breakfast, lunch, or dinner? Or perhaps, it is a prayer to your heavenly Father for your earthly dad.

Our Father Who Art in Heaven

Jesus, the son of a carpenter, honored His earthly dad, and also glorified His heavenly Father, as illustrated by this amazing story.

When Jesus was only 12, his family took him by caravan to Jerusalem for the Passover Feast. After returning home, his parents discovered He was missing and returned to find Him in the Temple with the teachers…

…they were amazed; and His mother said to Him, “Son, why have You done this to us? Look, Your father and I have sought You anxiously.”

Jesus’ earthly father and mother did not understand at the time what he meant. Notice what happened to Jesus until His heavenly Father called Him to ministry 18 years later…

Jesus kept increasing in wisdom and stature, and in favor with God and men. Luke 2:52 NKJV

What can we learn from Jesus as the Son of God? What most of us remember is how Jesus taught us to pray…

Our Father in heaven, Hallowed be Your name.
Your kingdom come. Your will be done. On earth as it is in heaven.
Give us this day our daily bread.
And forgive us our debts, As we forgive our debtors.
And do not lead us into temptation, But deliver us from the evil one.
For Yours is the kingdom and the power and the glory forever. Amen. Matthew 6:9-13 NKJV

What a great way to love God completely (upward), love ourselves correctly (inward) and love others compassionately (outward), whether we are at home, at work or in the community.

However, we are not without opposition.

The Father of Lies

There is another father who seeks to steal, kill and destroy. Like a roaring lion, he prowls seeking someone to devour.  Through pride and lust, trial and temptation, we can be tricked into following the father of death and destruction.

You are of your father the devil, and you want to do the desires of your father. He was a murderer from the beginning, and does not stand in the truth because there is no truth in him. Whenever he speaks a lie, he speaks from his own nature, for he is a liar and the father of lies. John 8:44 NASB

Resist the father of lies, and he will flee from you. Honor your earthly father and glorify our heavenly Father. Be especially alert in The World’s Broken Workplace.

For more training and equipping to win in the workplace, take a look at Step 1 of a 7 Step process in our Crossroads Career Work Book.