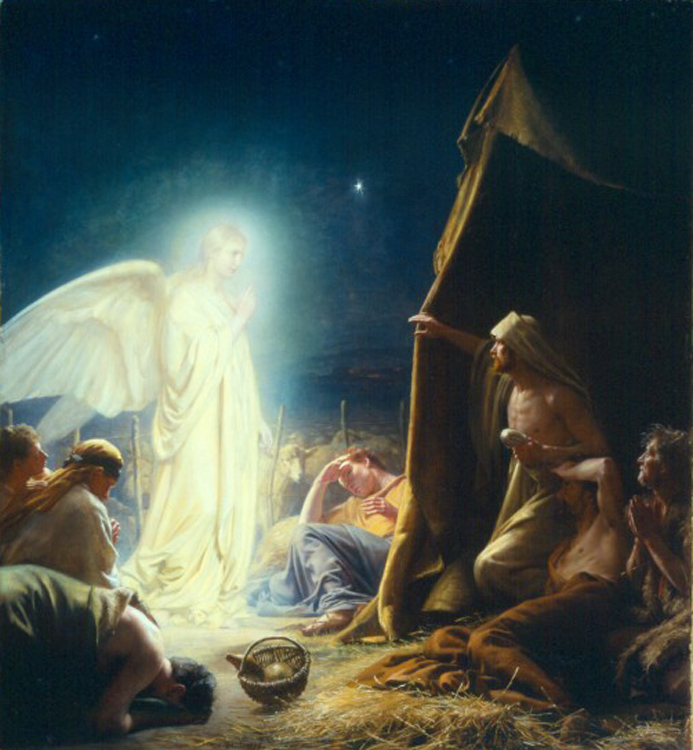 There were shepherds in the fields keeping watch over their flock by night. An angel of the Lord suddenly stood before them, and the glory of the Lord shone around them; and they were terribly frightened. But the angel said,

“Do not be afraid; for behold, I bring you good news of great joy which will be for all the people; for today in the city of David there has been born for you a Savior, who is Christ the Lord. This will be a sign for you: you will find a baby wrapped in cloths and lying in a manger.”

And suddenly there appeared with the angel a multitude of the heavenly host praising God and saying,

“Glory to God in the highest,

And on earth peace among men with whom He is pleased.”

When the angels had gone from them into heaven, the shepherds began saying to one another,

“Let us go straight to Bethlehem then, and see this thing that has happened which the Lord has made known to us.”

So they came in a hurry and found their way to Mary and Joseph, and the baby as He lay in the manger. When they had seen this, they made known the statement, which had been told them about this Child.

All who heard it wondered at the things, which were told them by the shepherds. Mary treasured all these things, pondering them in her heart.

The shepherds went back, glorifying and praising God for all that they had heard and seen, just as had been told them.

Why did the angels appear to shepherds?

According to Billy Graham’s Answers: When Jesus was born, it was only the first step in God’s plan of salvation. From all eternity, God had planned to redeem the human race from its slavery to sin — and now on that first Christmas the process was beginning!

There was, however, another reason why Jesus’ birth was announced first to the shepherds. They were humble men; in fact, shepherds were looked down upon by many people… By announcing Jesus’ birth to the shepherds, God was demonstrating His love for every one of us, no matter who we are. The Bible says…

“How great is the love the Father has lavished on us,

that we should be called children of God! And that is what we are!”

Christmas is the right time to praise God for all that you have heard and seen, just as you have been told. You can share the good news and your faith with love, grace and respect for everyone everywhere – a Christmas gift that keeps on giving all year, every year and forever.

More than 15 million Americans are suffering real unemployment this Christmas.  That’s almost one out of every 10 workers who are looking for a good job.

For almost 30 years, we have been helping people who are looking for jobs to also find Jesus. Our mission is to give glory to God in the highest by educating, equipping and encouraging people find a job, career and God’s calling.

We invite you to give by December 31 to sustain and grow this ministry. Please “like” and share social media posts you might see from us to expand their reach and impact! If you would like give to the future and hope of Crossroads Career Network, you may make a donation online or mail a check to:

Donations are tax-deductible.  Crossroads Career Services, Inc.  is a nonprofit IRS-approved 501c3 organization.  Learn more about us.   If you have any questions, email support@test.crossroadscareer.org.